With GDP reported for most of 2019, our conviction for 2.3% expansion grows. Exhibit 1 shows we have held this view for a while, with more recently consensus moving in line. But 2019 saw a more material shift in dynamic, with the Federal Reserve cutting rates three times in 2019 – where we expect it to finish – rather than hiking, as we had expected a year ago. The single biggest cause of this shift has been the rise in business uncertainty associated with a more aggressive than anticipated US trade policy - impacting global trade, activity and business investment. As we look to 2020 and 2021, the evolution of near-term uncertainties will continue to have a material impact on the outlook for the next two years, threatening to dominate medium-term economic factors. 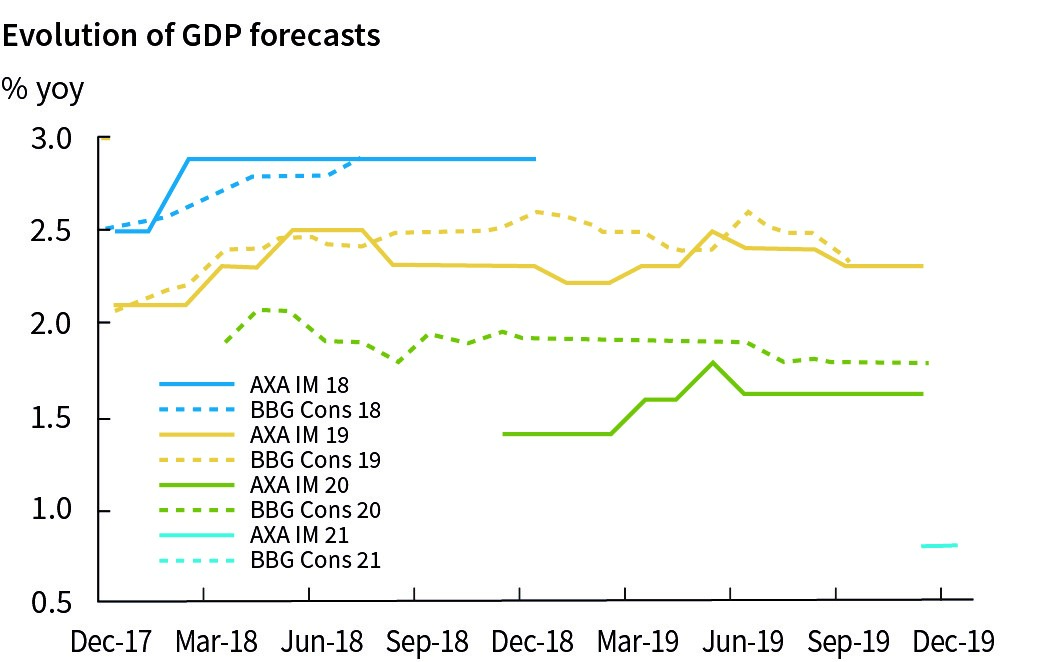 The US administration appears to have adopted a more conciliatory approach to trade policy recently. We currently expect a “Phase 1” interim trade deal to be agreed between the US and China in December. This limited deal should defer further tariff increases for increased purchases of US agricultural products and improved access for US financial services firms into Chinese markets - a deal that could have been struck in 2018. The thornier issues, of intellectual property protection, forced technology transfer and state subsidy, look set to be deferred to subsequent rounds of negotiations. The US has also delayed the threat of automobile tariffs and we expect both issues to be deferred until after the 2020 Presidential Election.

Next year’s Election is also likely to play a direct role in raising uncertainty. Democrat candidate Elizabeth Warren has closed the lead on front-runner Joseph Biden. Warren is a more extreme Democrat and could struggle to win over the Republican moderates needed to secure victory. But if she did, business’ concerns about her agenda could result in a fall in business sentiment – a reverse of the ‘Trump bump’. The Democrat selection process is in the early stage and Warren’s success is not guaranteed - but remains a risk.

The current impeachment process also means there is no guarantee that President Donald Trump will stand next year. We expect the House to pass Articles of Impeachment formally indicting the President by year-end. It is difficult to envisage enough Republican support for a two-thirds impeachment majority at present. Yet this will likely depend on the public view. Since the Ukraine scandal, polls show public approval for impeachment has risen to 50% from 40%. If public hearings see this this climb above 60% - the level approving former President Richard Nixon’s impeachment – senators may be influenced. For now, this looks unlikely, but it is no longer a tail-risk.

Looking beyond these uncertainties, medium-term economic factors look set to add headwinds to growth - albeit modestly next year, but more aggressively in 2021.

President Trump’s Tax Cuts and Jobs Act 2018 provided a marked fiscal boost in 2018, which faded, but still supported growth in 2019. Residual fiscal support falls away in 2020. Congressional Budget Office projections based on current legislation suggest a tightening in the fiscal stance in 2021.

Deteriorating credit conditions also look likely to weigh on growth. Mortgage credit conditions have tracked the slope of the yield curve with a two-year lag. This suggests this year’s curve inversion should result in tighter mortgage credit conditions over 2020 and 2021, which we expect to weigh on residential investment against a backdrop of weakening real disposable income growth. We also expect an ongoing modest tightening in credit spreads - something also seen in the latter 1990s and an additional headwind to US activity.

These factors should be somewhat offset by monetary policy no longer restraining growth. A combined policy of balance sheet unwind and rate hikes slowed growth by an estimated 0.7ppt in 2019. Although lags in monetary policy suggest this year’s easing will not support growth until 2021, the lagged impact of tightening should fade in 2020. We also expect a modest boost from global trade, as stabilisation associated with an interim trade deal emerges. Yet despite stimulus across a range of economies, the degree of stimulus and the scale of expected rebound should be modest compared with previous mid-cycle dips, particularly from China. 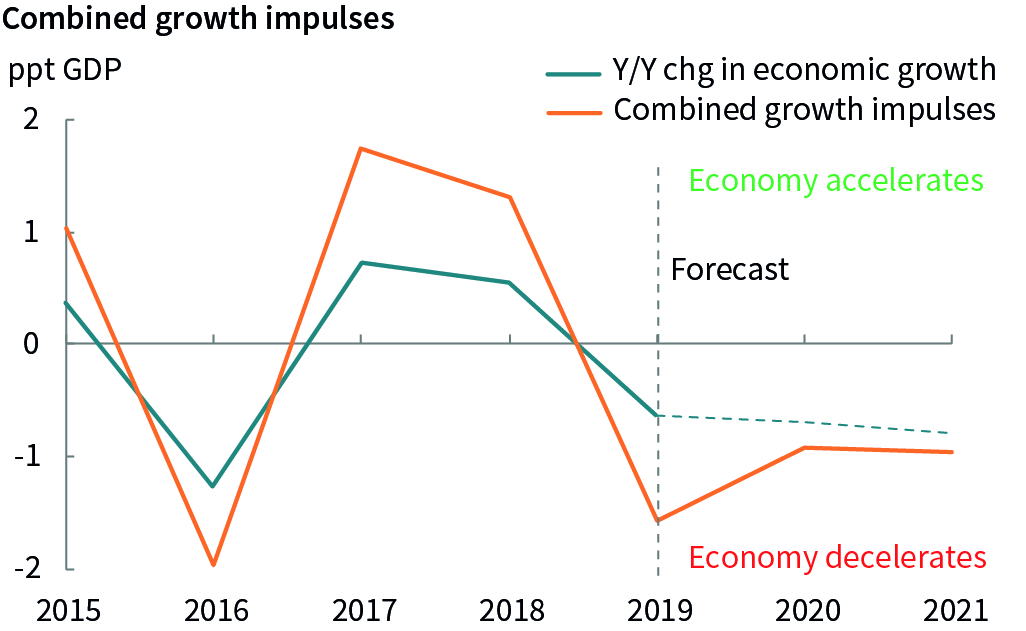 We estimate 2020 growth of 1.6%, although we consider risks to the upside, reflecting Fed stimulus and the outlook for global trade. We consider this to be around potential. Any further slowing into 2021 risks the economy dipping below ‘stall-speed’, which could derail the expansion.

A number of elements could accelerate a downturn. Unemployment in the US rarely rises gently. Exhibit 3 shows that, with one exception, each time the unemployment rate has risen by 0.35ppt from its latest nadir, it has resulted in recession and a more material jump in joblessness[1]. This likely reflects reduced consumer and business spending as job losses rise, creating a second-round growth effect. We forecast growth to slow below trend in 2021, consistent with a rise in unemployment that could trigger this reaction.

Moreover, financial conditions often exacerbate slowdowns. Equity markets tend to pre-empt deceleration, but a drop in equities can affect consumer spending through sentiment and wealth effects. Moreover, while we do not consider corporate debt levels to be problematic, a downturn would inevitably widen corporate spreads, reducing firms’ ability to borrow and spend. As such, market concerns for a downturn can tighten financial conditions, reinforcing a slowdown. 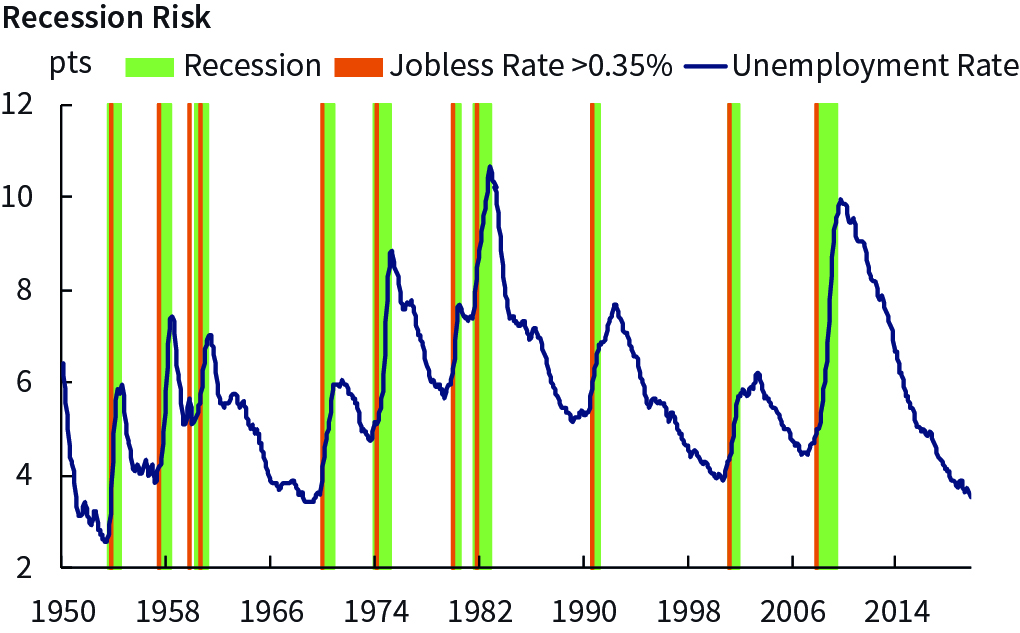 Acting together, these accelerators can combine to result in recession. But it is difficult to anticipate the timing of this combination with any precision. Our forecast for growth slowing to 0.8% in 2021 assumes these accelerators are at work and could include quarterly contraction.

Uncertainties and the role of the Fed

Downturns are often a surprise and it is a valid to ask whether anticipation of a slowdown is sufficient for prevention. The Federal Reserve anticipated some softening this year, easing monetary policy[2] as insurance against a sharper slowdown. However, lags in monetary policy mean the Fed would have to perfectly anticipate future deceleration and act early in 2020 to offset risks for 2021.

Historically, the Fed has rarely managed this. Moreover, it currently sees the economy “in a good place” stating that conditions would have to change “materially” to warrant further easing. Our outlook sees the Fed on hold now until Q4 2020. By then, we expect signs of renewed deceleration to lead the Fed to cut rates twice in 2020 (to 1.00-1.25%) and to its effective lower bound in 2021. Yet such renewed easing would not meaningfully boost growth until after 2021.

Forecasting the timing of below trend slowdowns is difficult. Extrapolation risk leads us to project current conditions into the future. Telescoping risks immediate materialisation of a future forecast. And material downturns have historically been associated with exogenous geo-political events. This returns us to whether the 2020 Election will reduce the risk of further slowdown. We have argued it is too early to be sure. However, a second term for President Trump could renew trade tensions, whereas a Warren Presidency could prompt a fall in business sentiment. Alternative outcomes are possible, but these scenarios appear the most likely at this time, suggesting next year’s election is likely to add to the prospect of slowdown, rather than reduce it.

[1] The Federal Reserve’s Claudia Sahm has observed a similar effect based around a 0.5% adjustment – the “Sahm rule”.

This document is for informational purposes only and does not constitute investment research or financial analysis relating to transactions in financial instruments as per MIF Directive (2014/65/EU), nor does it constitute on the part of AXA Investment Managers or its affiliated companies an offer to buy or sell any investments, products or services, and should not be considered as solicitation or investment, legal or tax advice, a recommendation for an investment strategy or a personalized recommendation to buy or sell securities.

It has been established on the basis of data, projections, forecasts, anticipations and hypothesis which are subjective. Its analysis and conclusions are the expression of an opinion, based on available data at a specific date. All information in this document is established on data made public by official providers of economic and market statistics. AXA Investment Managers disclaims any and all liability relating to a decision based on or for reliance on this document. All exhibits included in this document, unless stated otherwise, are as of the publication date of this document. Furthermore, due to the subjective nature of these opinions and analysis, these data, projections, forecasts, anticipations, hypothesis, etc. are not necessary used or followed by AXA IM’s portfolio management teams or its affiliates, who may act based on their own opinions. Any reproduction of this information, in whole or in part is, unless otherwise authorised by AXA IM, prohibited.

This document has been edited by AXA INVESTMENT MANAGERS SA, a company incorporated under the laws of France, having its registered office located at Tour Majunga, 6 place de la Pyramide, 92800 Puteaux, registered with the Nanterre Trade and Companies Register under number 393 051 826. In other jurisdictions, this document is issued by AXA Investment Managers SA’s affiliates in those countries.

In the UK, this document is intended exclusively for professional investors, as defined in Annex II to the Markets in Financial Instruments Directive 2014/65/EU (“MiFID”). Circulation must be restricted accordingly.