An introduction to bonds

The price of a bond is determined by combining the present value of all its expected future cash flows, which includes all coupon payments plus its par, or face value, at maturity.

If a bond’s price is higher than its par value, it should sell at a premium in the secondary market because its coupon rate is higher than the prevailing interest rates in the market.

But if a bond's price is lower than its par value, it will generally trade at a discount because its yield is lower than current interest rates.

This means that as a bond moves closer to its maturity date, its price is likely to move closer to par. Therefore bonds which are priced at a premium should decline over time and move towards the par value. On the other hand, if a bond is trading at a discount, it should increase over time towards its par value (see chart below). This means that investors should only be exposed to interest rate risk if they decide to trade on the secondary market. 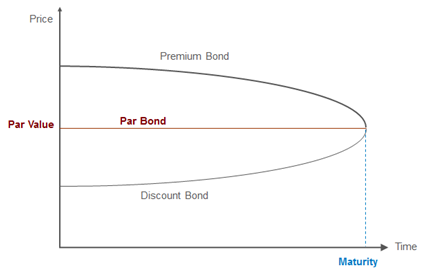 Bonds can be a good tool to generate income but what are the benefits and risks of investing in them?

Bond yields are referred to with a qualifier, such as current yield or yield to maturity, depending on how they are calculated.

Yield to maturity (YTM) on the other hand, looks at the current price of the bond, its time to maturity and the amount due at maturity. It assumes the security will be held until the end of its lifespan and that all coupons are reinvested at the same yield to maturity-rate. Mathematically, yield to maturity is the discount rate which equates the current bond price to the present value of all the future cash flows. Compared to a current yield assessment, YTM is a complex but more accurate calculation of a bond’s return and it also helps investors to compare bonds with different maturities and coupons.

The risks of bond investing

Bonds have the potential to be solid income generators and are generally considered to be less volatile than equities. However, they are far from a risk-free investment and as such, there are a number of potential pitfalls which investors need to be aware of. Some of the main risks include:

Interest rate risk is one of the most documented risks when it comes to bond investing. Interest rates and bond prices carry an inverse relationship - in other words, when interest rates rise, bond values decline. The reason behind this interconnection is relatively straightforward. For example, when interest rates rise, new bond issues come to market with higher yields than older securities, making those older ones worth less and as a result, their prices usually fall. But the opposite is true when interest rates decline – in this scenario if new bond issues come to market with lower yields than older securities, it makes those older, higher-yielding ones worth more.

Another key risk of bond investing is credit risk which refers to the possibility that a bond issuer will not pay the coupon income and or the par amount on its specified dates. It’s hard to judge whether a company could be solvable or not, in for example 10-years’ time, which might be the length of a bond contract. This why agencies, such as Moody’s or Standards & Poor’s issue credit ratings, where they rate a bond issuer’s ability to pay coupons and the principal on time.

There are a variety of ratings issued by these agencies. For instance, some bonds are rated as ‘investment grade’, which means that in theory at least, they should be a fairly reliable investment i.e. an investor is less likely to lose their capital but importantly this is not guaranteed. Bonds which are labelled as ‘high yield’, indicate greater risk i.e. there is a greater chance that investors will lose their capital. But because they are viewed as a riskier investment than bonds with a higher credit rating, they also tend to pay a higher rate of interest. As such, the basic rule of thumb is that the lower the credit rating, the greater the credit risk  involved and vice versa.

Inflation risk occurs when an investor is holding a bond which is not linked to inflation or a bond with a coupon which cannot match the pace of inflation. The risk here is that the nominal return will be eroded by the impact of rising inflation. When an investor buys a bond, they essentially commit to receiving a rate of return, either fixed or variable, for the duration of the bond, or at least for as long as it is held. But if inflation increases at a faster rate than the income of the investment, investors will see their purchasing power eroded and may actually achieve a reduced real rate of return.

Investors investing in bonds outside of their local country are exposed to currency risk. Here the risk is that the bond’s base currency will depreciate relative to an investor’s local currency, which will cause a fall in the value received in local currency.

Reinvestment risk means that future cash flows, either coupons or the final return of principal, will need to be reinvested in lower-yielding bond securities. Reinvestment risk is more likely when interest rates are declining. Another potential hazard is call risk, which applies to investors in a callable bond - a type of bond which allows the issuer to retain the privilege of redeeming the security at some point before it reaches maturity. Liquidity risk refers to the frequency with which a particular security trades. When a bond is said to be liquid, there’s generally an active market of traders. Treasury bonds and corporate bonds issued by big companies are generally very liquid but not all bonds enjoy such liquidity and this can present a problem if an investor attempts to sell before maturity. If fewer people are interested in buying a particular bond, this means that an investor is more likely to have to sell their investment at a lower price.

Always remember that past performance should never be viewed as a guide to future returns.

Not for Retail distribution: This document is intended exclusively for Institutional/Qualified Investors and Wholesale/Professional Clients only, as defined by applicable local laws and regulation. Circulation must be restricted accordingly.

This communication is for informational purposes only and does not constitute on the part of AXA Investment Managers or its affiliated companies an offer to buy or sell any investments, products or services and should not be considered as a solicitation or as investment, legal or tax advice. Opinions, estimates and forecasts herein are subjective and subject to change without notice. There is no guarantee forecasts made will come to pass. Data, figures, declarations, analysis, predictions and other information in this document is provided based on our state of knowledge at the time of creation of this document, and is . Whilst every care is taken, no representation or warranty (including liability towards third parties), express or implied, is made as to the accuracy, reliability or completeness of the information contained herein. Reliance upon information in this material is at the sole discretion of the recipient. This material does not contain sufficient information to support an investment decision. This communication is issued by AXA Investment Managers UK Limited, which is authorised and regulated by the Financial Conduct Authority in the UK. Registered in England and Wales No: 01431068. Registered Office: 7 Newgate Street, London EC1A 7NX. In other jurisdictions, this document is issued by AXA Investment Managers’ affiliates in those countries, including AXA Investment Managers UK Ltd (which is authorized and regulated by the FCA). © AXA Investment Managers 2017. All rights reserved.