Central bank digital currencies may soon become a reality. With the COVID-19 pandemic definitively clearing the way for electronic payments, plans for the creation of Central Bank Digital Currency (CBDC) are multiplying. This is profoundly different from bitcoin-style cryptocurrencies. A CBDC is issued by a central bank, backed by its credibility and the law itself, like the banknotes we use every day. Cryptocurrencies however are instruments that do not belong to anyone, have no real assets backing them, and lack a clear governance structure.

The interest of central banks in digital currencies is not purely academic. In China, tests have already been carried out on retail customers, with excellent results[1]. The European Central Bank (ECB) is very focused on the matter, to the point of not only producing studies and publications, but also commissioning surveys to assess the appreciation of a ‘digital euro’ among citizens and businesses. Even the Bank for International Settlements (the institution promoting coordination between central banks) has taken to the field to try to harmonise various projects.

Potential advantages – and the hurdles to overcome

But why this sudden rush for a digital currency? This is partly due to the threat of the advent of a private ‘stablecoin’, a cryptocurrency which pegs its value to an external reference point, such as Facebook’s diem (previously known as the libra) and, in general, the interest of central banks in maintaining control of the financial sector and the payment system.

The ECB has stressed that the advantages of a digital euro would be significant – from the complementarity with banknotes to the efficiency of payments, from the contribution to the digitalisation of the economy to the fight against undeclared cash. Not to mention the security of having an instrument controlled by the central bank, and not for example by private individuals residing outside the Eurozone. The ECB could also give citizens the opportunity to directly deposit their digital euros with the central bank, without the intermediation of normal credit institutions. This would be a real revolution.

However, there are more than a few kinks that need to be ironed out. If it were to open up the possibility of depositing directly with the ECB, private banks could find themselves in difficulty on the funding front. In Italy, for example, credit institutions are not transferring negative rates to their customers because they raise funds to be used through deposits - but what would happen if Italians decided to put their savings directly into ECB accounts, considered more reliable? Banks could find themselves with much less cash in their coffers.

Let’s not even talk about what would happen in a situation of panic, when the fear of private banks defaulting might force savers to suddenly transfer their money to the central bank, causing credit institutions to lose their deposit base. An ECB equipped with digital currency and open to private accounts could potentially force traditional banks to become more oriented towards investment banking and less towards the current ‘one-stop’ banking business model.

The Bahamas launched a national digital currency in late 2020 – the first of its kind in the world. The ‘sand dollar’ is a digital version of the Bahamian dollar aimed partly at addressing limits to traditional infrastructure across the hundreds of islands that make up its archipelago[2].

Among the major economies meanwhile, Beijing is leading the race. While the US Federal Reserve is still studying the potential, the People’s Bank of China (PBoC) will likely be the first big name to launch its own digital currency. After all, e-money is already a reality in China, with WeChatPay and Alipay (financial arms of WeChat and Alibaba) transactions that have exceeded the global transactions of Visa and Mastercard combined[3]. Moreover, the Chinese banking landscape includes both private and public banks, such that there is already a higher level of continuity between the PBoC and credit institutions.

Read more: What is the future of a cashless society in a post-COVID-19 world?

The advantage of being the first to introduce a digital currency would be tremendous - a ‘first mover advantage’ that would potentially allow China to establish the renminbi as an alternative reserve currency to the US dollar.

In fact, Beijing accounts for about 20% of the world economy today, but the yuan is worth only 2.1% as a reserve currency, compared to the dollar at 63% (see chart below) - the digitisation of the currency could lead to a ‘yuanisation’ of international trade. It could represent a potent currency weapon against the greenback, in particular in the Asian free trade area just consolidated with the Regional Comprehensive Economic Partnership – a colossal trade agreement that in addition to China and the 10 Association of South East Asian Nations member states also includes Japan, South Korea, Australia and New Zealand. 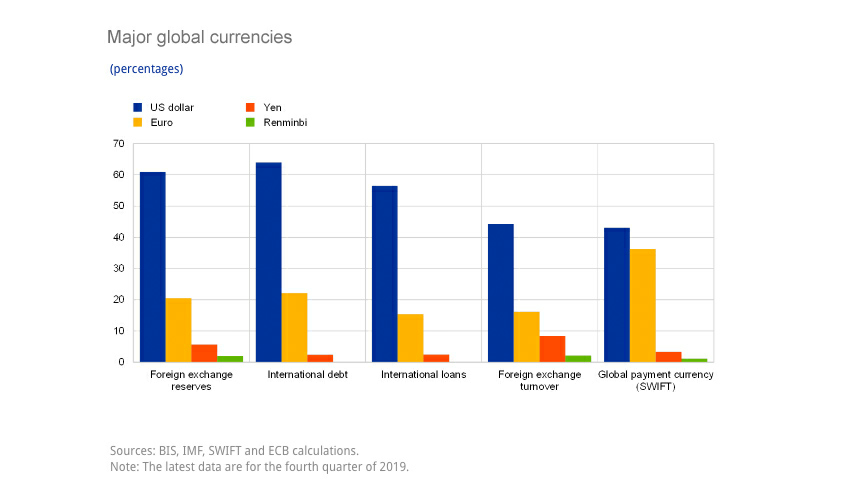 The experimental tests conducted by Beijing in recent months have been positive, but there are probably some problems that need to be resolved on the technological side - managing a CBDC with an audience of over one billion citizens and businesses isn’t easy. But the Dragon appears determined to cross the finish line first, conquering new territory in the world currency system.

Read more: What investors need to know about the evolving economy

Discover more about the Evolving Economy

The Evolving Economy is all about identifying companies that are tapping into multi-decade demographic and technological changes, regardless of their region or sector classifications.

[2] Central Bank Digital Currency: The First Nationwide CBDC In The World Has Been Launched By The Bahamas (forbes.com)